Injuries from physical play and sports are common throughout childhood and adolescence, but with the growing popularity of video games, some children now experience the same types of aches and pains that their parents get from sitting at a desk all day at work. Taking steps to help kids prevent common video game injuries can reduce pain today and potentially reduce the risk of long-term damage.

Time Limits, More Movement Are a Must

According to Scott Bautch, DC, president of the American Chiropractic Association’s (ACA) Council on Occupational Health, common musculoskeletal issues caused by hours of gaming in front of a screen stem mainly from lack of movement and postural stresses. Common complaints among gamers include eye strain, wrist, arm/elbow and hand/thumb strain, classic carpal tunnel syndrome, and upper back and neck pain.

While some gaming systems do encourage movement (and can potentially cause injuries, too), the sedentary reality of gaming is what concerns chiropractors like Dr. Bautch. “Joints live by motion,” he says. “They get their nutrition through movement.”

To offset the lack of movement and postural stresses associated with gaming, Dr. Bautch suggests making some adjustments:

Simply limiting video game time is a good way to offset potential musculoskeletal problems. Dr. Bautch recommends parents start early with limits on screen time so that by the time kids become teenagers, boundaries are understood. While the age and specific circumstances of a child influence what limitations are appropriate, Dr. Bautch generally advises older kids to take at least a two-hour break after two hours of play. He also encourages physical activities and face-to-face time with friends to balance the sedentary and sometimes solitary gaming experience.

To reduce the chance of video game injuries, Dr. Bautch suggests making the gaming environment as ergonomic as possible. Begin by ensuring the screen is at eye level, so necks don’t have to bend too far up or down. Whether kids sit or stand while playing, encourage them to keep their bodies in a “neutral” position, which means muscles shouldn’t be too contracted or too extended. If sitting, try using a chair that has back support as well as cushioned arm rests. Strive to keep the body aligned: ears over shoulders and shoulders over hips.

During a play session, Dr. Bautch suggests gamers take a 15 second “micro-break” every 15 minutes. During this time, they should take their eyes off the screen and stretch and lengthen whatever has been bent (like an elbow) and bend whatever has been straight (such as legs if they have been standing). Stretch hands, fingers and wrists in the opposite direction that they have been used. If kids lean their shoulders forward while playing, encourage them to do a gentle stretch backward, pushing their shoulder blades together. Dr. Bautch says sitting on a gym ball while playing video games can also encourage small movements as a player shifts to maintain balance.

Talking to kids about the risks of overdoing video games is a good idea, too. Dr. Bautch says he has discussed gaming injuries with young people who come to his clinic in Wausau, Wis., and it does seem to make an impact when they learn they could do permanent damage to their bodies without the proper precautions. “If possible, have a plan regarding limits before kids start using technology,” he recommends to parents. “Don’t think they can moderate themselves.”

Reviewed by the ACA Editorial Advisory Board.

This information is for educational purposes. It is not a replacement for treatment or consultation with a healthcare professional. If you have specific questions, contact your doctor of chiropractic. To find an ACA chiropractor near you, click here.

After the Storm: Yard Clean-Up Safety

Winter storms and other severe weather events have been sweeping the nation lately, leaving snow, leaves and debris in their wake. Yard clean-up is unavoidable after a storm, whether it’s shoveling snow, raking leaves or picking up fallen branches. And although you can’t avoid doing yard work, you can avoid injury by keeping these safety […]

Staying Fit As You Age

Exercise is often prescribed for patients of all ages to reduce complaints about pain in muscles and bones, but some feel it gets harder to exercise as they get older. “For seniors, exercise can also be an incredible way to be social,” says Scott Bautch, DC, president of the American Chiropractic Association’s Council on Occupational […] 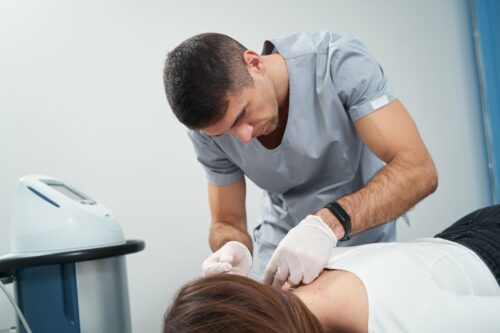 By Christina DeBusk Doctors of chiropractic are experts in addressing musculoskeletal conditions without the use of drugs or surgery. While best known for spinal manipulation, chiropractors may use a variety of evidence-based therapies to help their patients. Some DCs are even trained in acupuncture or work in integrative clinics where acupuncture is provided, giving patients […]